“El Perico” -or in English, “The Parakeet” is the name of a weekly publication edited and published by Dr. Martinez first for 3 months in 1885-6 and later in in 1889-1895.  In this publication, Dr. Martinez exposed the motives and the fallacious arguments of those who were attempting to re-impose a theocratic system of government on Ecuador.

Suppression by the Government

As a result of this publication, Dr. Martinez was exiled to Peru “under threat of imprisonment”1 in February 1886 for three years and the government shut down the publication of “El Perico” at that time.  At the time of this exile, he was married to his first wife Rafaela Serrano y Ruiz and the couple had several young children.   He was also a highly respected surgeon in Ecuador at this time.

Character and tone of the publication

The name of Dr. Martinez did not appear on these issues of “El Perico”, nor did the name of any of the other authors.  The authors of the various articles were all either birds -such as “The Nightingale”- or pseudonyms such as “Cyril Cockatoo” or “Clarissa the Unfortunate”.

…and so on November 7, 1885 he founded the satirical weekly “El Perico” which had the theme “Each bird cuts his own quill and proceeds” and enjoyed great popularity, perhaps like no other paper had managed until then. It was published with “right style, light sentences and timely and sharp jokes”, [and contained articles by authors] using various pseudonyms which became famous such as “Clarisa the unfortunate”, “Little turkey-hen”, and “Cyril Cockatoo”.
–source: Ecuadorian Biographical Dictionary (translated)

The historian Camilo Destruge Illingworth described the literary tone of Dr. Martinez’ publications as having “The right style, with a light sentence, the joke being always proper and sharp, without descending to insults, and without the profanity frequently resorted to by many who attempt such difficult genre, not knowing how to handle it.”  Another source maintains that El Perico was free of “any hint of ridicule or insulting words toward political opponents.”2

“Each bird cuts his own quill and proceeds”

“If the birds sing in different ways according to their kind, let us not prevent them from emitting their sounds, their six discordant sounds, with which their supreme creator has endowed them, provided that they do not disturb the tranquility of the forest.”

The Poet in “El Perico” 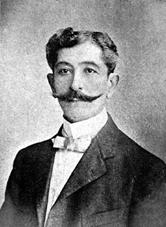 Joseph Lapierre was the poet in “El Perico”

There have been episodes in world history when accomplished poets have influenced political outcomes. Issues of “El Perico” included poetry by an author who went by the pseudonym of “Nightingale”. This poet was Joseph Lapierre. It would be difficult or impossible to translate Lapierre’s poetry into contemporary English. But in Spanish it is clear that his verses have a cutting ring to them and his words found their mark. When Dr. Martinez was exiled to Peru for publication of El Perico, Joseph Lapierre was exiled with him.

Later as an older man during the administration of Eloy Alfaro, Joseph Lapierre became one of the leading thinkers of the “liberal revolution” and some of his speeches -delivered at key points to help clarify the way on difficult social issues- are still extant today.

Why “El Perico” is important

El Perico is important because in 1885, during the Presidency of Caamaño, the future of the country was in the balance. After the death of extremist President Garcia Moreno in 1875 the pendulum had swung in the opposite direction temporarily in the early years of Vientimilla’s presidency (1876-1883). But when Caamaño came to power in 1884 he was hailed as “Conservative and Catholic, devoted to the Church and to the people”3 :

“He had determined on a solemn glorification of the Christian hero [Garcia Moreno] …a magnificent service was held in the Cathedral in the presence of all the bishops …the Apostolic Nuncio officiated amidst the tears of assistants. ”
–from Berthe “Garcia Moreno, President of Ecuador p.327

In Caamaño, the pro-Catholic faction fervently saw or wished that true and lasting victory was finally within their reach; it was now just a matter of time until the “Republica Catholica” would be finally established on a true and lasting foundation.

Then came the talking bird in “El Perico”, complete with “Mr. Woodpecker” and “The Nightingale” and “Clarissa the Unfortunate” -and the fanatical faction in Ecuador started to learn that it wasn’t going to be so easy…

This entry was posted in Church and State, Dr. Francisco Xavier Martinez. Bookmark the permalink.