Full text of the Ecuador Concordat of 1862

Apostolic See: Title assumed by the Pope intended to call attention to the fact that he claims to be associated with one of the Apostles of Jesus Christ.
Bull: Decree of the Pope
cannonical law: Religious laws created by church councils (or sometimes by decree of the Pope) are called “cannon” law to distinguish them from laws revealed in the text of the Bible.
Catechism: Book of Roman Catholic religious concepts intended to be memorized.
diocese, diocesan: geographical districts of church jurisdiction.
ecclesiastical: Of the church.
ecclesiastical tribunal: This is a religious or church court intended to pass judgement on individuals in certain cases such as marriage, divorce, …etc. In Moreno’s Ecuador, the Concordat gave full and final jurisdiction to the church court on many important matters such as marriage, divorce, …etc. requiring the civil authority to enforce such judgements.
exequatur: A law or formal legal decision whereby the civil government of a nation permits the laws of the Roman Catholic Church to take effect in its territory. Note that this term has a meaning in civil law (ie outside the church) but it was also used with a special religous/civil definition by the church since the middle ages.
His Holiness: Title assumed by the Pope.
Holy See: This is intended as a reference to the Pope himself.
Holy Father: This is intended as a reference to the Pope himself.
Ordinary: Title associated with various designated church officials at all levels.
Seminary: An institution of higher learning for religious instruction of students preparing to become clergy or priests.
Supreme Pontiff: This refers to the Pope. This title had its origin in the Pagan Roman Religion; it originally referred to the high priest of the “College of Pontiffs” in ancient Rome.
In the Name of the Most Holy and Undivided Trinity.
His Holiness, the Supreme Pontiff, Pius IX, and the President of the Republic of Ecuador have nominated as their respective plenipotentiaries:
For His Holiness: His Eminence, Monsignor Giacomo Antonelli, Cardinal of the Holy Roman Church, Deacon of S. Agatha in Suburra, his Secretary of State and of External Relations;
For the President of the Republic: His Excellency, Monsignor Ignacio Ordonez, Archdeacon of the Cathedral Church of Cuenca in the same Republic, etc., etc., and Minister Plenipotentiary to the Holy See.
These persons, having exchanged their respective full powers, have agreed on the following Articles: 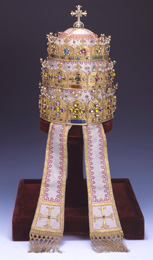 The Tiara of Pius IX

In witness whereof the above-mentioned Plenipotentiaries have signed and sealed the present agreement with their respective seals.
Given at Rome on the 26th day of September, 1862.