The Histories of Enrique Ayala Mora

Dr. Enrique Ayala Mora received his doctorate in History from Oxford University in 1982. His books on 19th and early 20th century Ecuadorian history stand out as the most succinct and reliable authorities on the period. However they are written in Spanish and no authorized translations into English are available.  So out of a desire to make these authoritative accounts of these important events available to English-Speakers, ad-hoc translations of some key sections from his histories were made by Patrick Connolly in 2014 and presented here; see the links below. 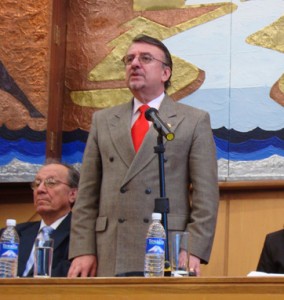 The “Manual de Historia del Ecuador (Vol II)“ (“Manual of the History of Ecuador”) presents a very condensed version of Ecuadorian History suitable for a brief overview course. The specific passages excerpted here start at the revolution of 1895, including both of Alfaro’s terms, Presidents Plaza and Garcia, the Murder of Alfaro and then an overview of the movement including “Church and State”, The Liberal Program, and Structure of the state.

This is a very condensed overview of the clashing idologies and factions that rent the body-politic of Ecuador in the late 19th and early 20th centuries.
The birth and early evolution of political parties in Ecuador.
The story of the “Esmerelda Affair” – the covert sale of a Chilean ship to Japan. The uproar over this scandal precipitated the fall of the “Progressive” party and the advent of the “Liberal Revolution”.
Eloy Alfaro and June 5th
Alfaro’s assumption of the presidency was preceeded by a power struggle that assumed the proportions of a civil war.
Dictatorship and First Term of Alfaro
Brief survey of some of the highlights of the opening years of Alfaro’s first term.
Administration of Plaza
By the time Alfaro’s first term drew to a close, a split had developed in the Liberal Party. Leonidas Plaza was the focal point of the new faction and he succeeded Alfaro in the presidency in 1901.
Government of Garcia and the Revolt
At the end of Plaza’s first term in 1905, he promoted Lizardo Garcia to succeed him as president. Garcia adhered to Plaza’s strain of Liberalism. Within several weeks of his assumption of the office he was overthrown in a coup by Alfaro.
Second term of Alfaro:
Accomplishments and Stumbling blocks of Alfaro’s second term.
Fall and Assassination of Alfaro:
Chronicle of the events at the close of Alfaro’s second term, and the Assassination of Alfaro; including an analysis of the ramifications of these events for Ecuador.
Church and State
Discussion of the character, motivation, and methods of the secular reforms pursued by “Liberal” presidents Alfaro and Plaza.
The Liberal Program
Social and Economic reforms of the “Liberal” presidents and their administrations.
The structure of the State
Impact of the “Liberal Revolution” on the administrative structures of the state.

History of the Liberal Revolution in Ecuador is Enrique Ayala Mora’s comprehensive overview of the Revolution based on his Oxford PhD dissertation.

After Alfaro’s first term, Leonidas Plaza became president; his term lasted from 1901 to 1905. In this chapter, Dr. Ayala discusses the dramatic power struggle at the end of Plaza’s presidency in 1905 including an interesting discussion of the differences between the Alfaro strain of Liberalism and the Plaza one.
In 1905, Eloy Alfaro overthrew Lizardo Garcia, Plaza’s elected successor, just a few weeks into Garcia’s term. This section explains how it happened including an analysis of the political and social forces in play at the time.
As the close of Alfaro’s second term approached, the question of a candidate to succeed him dominated events. This section discusses those events …which led ultimately to Alfaro’s ouster and premature departure from power on August 11, 1911.
After assuming the presidency at the end of Alfaro’s second term, Emilio Estrada survived a mere three months: he died from a heart condition. A power vacuum resulted and Alfaro who had left the country expecting to spend the rest of his days in his wife’s native Panama was drawn back into its vortex and ultimately assassinated in that tragic event known to all Ecuadorians as the “Arrastre” or dragging of Eloy Alfaro. This section is one of the most authoritative accounts of those tragic events.
This section opens with a discussion of the question of which authorities might have been immediately complicit in the murder of Eloy Alfaro. Then it broadens into a survey of the various Ecuadorian forces in play throughout Alfaro’s life; the environment that brought him to the presidency and the forces that would later sweep him from power.
This section is a general overview of the whole church-state issue in Ecuador with special focus on the approach of Alfaro and some of his key supporters to the issue. The role played by the Concordat is also discussed as is the Patronage issue. The difficulties encountered in efforts to acheive a true “separation” of church and state leading up to the “controlled break” are detailed.
The struggles for the final establishment of a Civil Registry and a Law of Marriage and Divorce are chronicled. This section includes a discussion of church control in Ecuador as compared to the other Latin American countries colonized by Spain.
This is a discussion of the type of people who made up the bulk of the ultra-right faction of the “conservatives”, known as the ‘goths’.
Discussion of the activities of the extremists among the conservatives who caused significant difficulty and disruption during Alfaro’s first term, including the clergy-incited military revolts in collaboration with Columbia from the north (the “Catholic Restoration”).
This entry was posted in Historical Survey. Bookmark the permalink.