After his original ordination as a priest, Count Mastai-Feretti had been sent by the then Pope Pius VII on a mission to Chile and Peru to assist the Vatican legate in those countries as an auditor.  When the Conclave elected him Pope in 1846 he was not only the religious head of the Roman Catholic Church but also the temporal ruler of the Papal States assuming the new name of Pius IX. 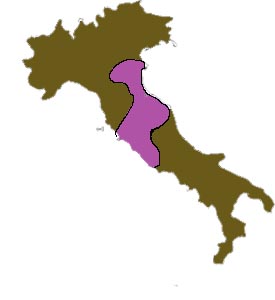 The papal states -located in Central Italy- were ruled by the Popes for thirteen centuries. 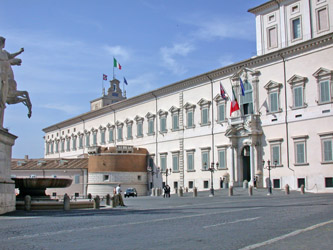 His was the longest papacy (32 years: 1846-1878) in the history of the Catholic Church. Like the popes before him he lived not in the Vatican but in the Quirinal Palace which also housed the central offices of the Papal States.

About a decade after his election to the Papacy, in 1858, Pope Pius IX became involved in a human rights violation so egregious that it assumed the dimensions of an international incident. This was the case of Edgardo Mortara, a six-year-old Jewish boy who was forcibly taken from his Jewish parents -who were residents of the Papal States- to be forcibly raised as a Catholic. Widespread publicity was generated as a result of this incident; several of the crowned heads of Europe, leading intellectuals and organizations expressed vehement objections to the Pope but he turned a deaf ear to them. 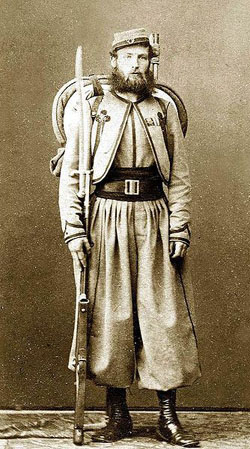 A Papal Zoave armed with rifle and sword

Toward the close of the 1850’s, when political conditions in Italy threatened the future of the Pope’s temporal reign over the Papal states, a “crack unit of volunteers” coming from all over the world but primarily from Europe and North America was recruited in the hope of defending the pope’s territories. These volunteers were called the “Papal Zouaves”. Ever since the time of the Concordat of Worms in 1122 when Holy Roman Emperor Henry IV was humiliated by the Pope and begged in the snow to be let back into the good graces of the church, the weapon of excommunication had been powerful enough to keep many Kings from challenging the Pope but now that weapon was no longer sufficient and the Papal Zoaves, armed with guns, bayonets and swords were arrayed to defend the territory of the Pope on a battlefield. This Papal Army, with the assistance of French Troops under Napolean III fought real battles – such as the Battle of Mentana – in which the number of casualties (killed) on the opposing side numbered in the thousands.

But in the early 1860’s, while Pope Pius IX was busy preparing for what he hoped would be a victorious defense of the Papal States, he had the consolation of dealing with a much more conciliatory Head of State; President Garcia Moreno of Ecuador.

While so many other Heads of State around the world were openly criticizing the Pope for conditions in the Papal States – so loudly that he was issuing Papal Encyclicals condemning Secularism (and U.S. President Lincoln was busy with the American Civil War) – the Ecuadorian president’s dearest wish was to make Ecuador a Roman Catholic Nation-State.   He and Pope Pius IX were busy working out the terms of a Concordat which would be approved by the Ecuadorian government in 1862. The last article of that concordat is illustrative of the authority it granted to the Pope in Ecuador:

Art. 24. By virtue of the this Concordat all laws and decrees published hitherto in whatever manner and form in Ecuador are revoked in the respects in which they are contrary to it; and the aforesaid Concordat is always to be considered as a perpetual law of the State

“This Concordat is (from the Church’s point of view) the most favourable ever concluded with any modern State.  The situation which resulted from it, with its explicit establishment of Catholicism in the social and political life of a modern State, is the positive antithesis of the secularist propositions condemned by Pope Pius IX in the Syllabus Errorum“. ( p. 273)

This concordat deprived Ecuadorians of many fundamental human rights and so it became the cause of much conflict and disturbance in Ecuador until it was permanently abolished in the years after Eloy Alfaro’s Revolution.

In late 1868 or early 1869 Pope Pius IX was the recipient of a tablet from Baha’u’llah with the admonishment:

O Supreme Pontiff! Incline thine ear unto that which the Fashioner of mouldering bones counseleth thee, as voiced by Him Who is His Most Great Name. Sell all the embellished ornaments thou dost possess, and expend them in the path of God, Who causeth the night to return upon the day and the day to return upon the night.  Abandon thy kingdom unto the kings, and emerge from thy habitation, with thy face set towards the Kingdom, and, detached from the world, then speak forth the praises of thy Lord betwixt earth and heaven. …

The warning went unheeded. Undaunted, the beleaguered pontiff strove to retain the moral high ground and clung to the hope that his vastly outnumbered papal zoaves might yet enable him to retain his temporal sovereignty by shedding the blood of his opponents on the battlefield. But in 1870, faced with the cannonade of King Victor Emmanuel II at his door Pope Pius IX ordered the white flag of surrender raised over the dome of St. Peters and the Papal States became part of a newly-unified kingdom of Italy. The Pope was forced to move his residence from the Quirinal Palace to the Vatican and Pius IX reluctantly proclaimed himself to be “the prisoner of the Vatican” bemoaning the loss of the “Eternal City” over which the Papal flag had flown for a thousand years.

But five years later, in 1875, a small group of assassins wielding knives, machetes and revolvers approached President Garcia Moreno as he was entering the presidential palace and suddenly fell upon him – assassinating him under a rain of machete blows and gunshots. A leading commentator would later remark that as a result of this assassination civil wars were started precipitating…

“…almost a quarter of a century of fighting, the complete exhaustion of the resources of the country and the loss of many thousands of valuable lives.”
–from Webster E. Browning Ph.D. “The Republic of Ecuador, Social Intellectual and Religious Conditions today.” (pub. 1920)

There is a brief historical overview of Pius IX’s papacy and the loss of the papal states on answers.com

There is an infomative blog about the Papal Zoaves
The term “Zouave” originally designated a class of infantrymen in the French Army, and the etymology of the term zouave is explained here (click).