The concept of Patronage

Definition: “Patronage” refers the power to nominate or present a cleric for installation into a Roman Catholic Ecclesiastical office (priest, bishop, …etc).
Derivation: Originally if, for example, a very wealthy individual founded a Christian community in a certain region complete with one or more Churches and buildings and other institutions, he would sometimes be regarded as having the status of “Patron” (due to the financial support he had given for the founding of this community) and in some instances he would be given a say in the appointment of religious leaders (Archbishops, bishops, etc) in that region. Down through the ages, this “right of patronage” changed and developed; eventually it was expanded to encompass large districts, countries, even continents -with the king as the “Patron” being granted the “Right of Patronage“.

In the history of Ecuador -and of South American countries in general- this question of Patronage is very important for an understanding of Church-State relations.

Why the question of Patronage was important

At first glance, the question of who should have the right to appoint a bishop or priest might seem unimportant from the perspective of temporal rulers. But the reality is that from Medieval times European Kings were certainly astute enough to understand that their power really came from the people, that the people’s religious views could (and often did) influence how they viewed their rulers and that the stated views of religious leaders such as bishops and priests could profoundly affect how the people viewed the king and his government. So kings sought to gain control over the appointment of bishops and priests within their realms. This control was not freely granted by the pope and the history of how it was granted or denied to the Spanish government -long before the voyages of Christopher Columbus- is different from the history of how it was handled in Germany.

Scholars distinguish between “particular Patronage” -the right to present clerics in a small parish or region- and “universal Patronage” -the right to present clerics in an entire country or Continent. This is important because Spain would ultimately obtain the right of “Universal Patronage” over all of South America. These regions ‘conquered’ or ‘discovered’ by Christopher Columbus and the conquistadors were originally called ‘the Indies’ and so the grant was known as the “real patronato de Indias” or in English: “the Royal Patronage of the Indies”. Less than two decades after the voyage of Christopher Columbus, in 1508, Pope Julius II conceded Universal Patronage of the Indies to the Spanish Crown1.

Map showing the “Reconquista” of the Iberian Peninsula. ( Image: Wikipedia)

The evolution and development of Roman Catholic doctrine on this subject can be traced back as far as a thousand years before Columbus but the formalization of the practice can be traced to the long period of the “Reconquista” when the Moslem Arab “Moors“2 were fully and completely ejected from the Iberian Peninsula (“Reconquest”). This was a process that took several centuries but it culminated in the very year of Columbus’ “Discovery” of America.

“From an early date in the history of the Christian Church it became the custom to make concessions to the founders of religious establishments. At first these privileges were conceded only to ecclesiastics…
…The reconquest of ancient sees from the Moors and the establishment of new ecclesiastical districts in the conquered territory gave impetus to the development of particular patronage. [Pope] Gregory VII in 1073 recognized conquest as the title to patronage, following the example of his predecessor, Alexander II, who had conceded to the kings of Aaragon and their successors the right of presentation to the churches retaken from the Moors or those newly erected in the reconquered territory. These concessions of the Holy See were regarded as recompense for the incessant zeal which the kings of Spain displayed in the wars of the Moorish Crusade. …the Fourth Lateran Council declared, ‘It is not just to destroy the legitimate rights of patrons‘. From the time of Alfonso I of Castile to the conquest of Granada the Spanish monarchs exercised the privilege of particular patronage…

…When Columbus reported the discovery of the Indies to Ferdinand and Isabella, the Catholic Kings appealed to the pope to grant them title to the newly discovered lands. In presenting the petition they insisted that their most ardent aim was to extend the dominion of the Roman Catholic faith. …Since the papacy enjoyed such moral and political authority, the temporal rulers sought its aid to prevent other Christian princes from wresting their conquest from them. Portugal at that time was actively engaged in exploration and it would have been easy for serious conflict to arise between the two Iberian crowns… 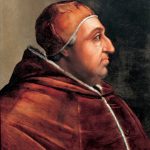 …The pope, because of the great distance which separated Rome from America, as well as the lack of means to equip expeditions, was obviously unable to Christianize the Indies and establish there an Ecclesiastical regime independent of the temporal power. The sovereigns of Spain, on the other hand, were the only ones capable of undertaking the establishment of the transatlantic Church. Thus, in proof of his impotence and to give stimulus to the proselyting zeal of the Spanish kings, Pope Alexander VI acquiesced in their requests. …A condition attached to the papal grant was the obligation to prosecute missionary work in the new lands. …Pope Alexander declared that his purpose in bestowing great privilege upon the Spanish sovereigns was to recognize and reward their Christian zeal in liberating Grenada from the Moors and in sending Columbus to distant lands to discover more people who might be won to the Catholic fold. It is possible that Alexander’s nationality, he being an Aragonese of illustrious family, may have influenced him to favor the Spanish monarchs.”
–from Mecham “Church and State in Latin America”, pages 11, 13

The Mechanics: How it was done

In practice, the request from the king for Patronage over a region would work as follows:

…the Spanish sovereigns had been accustomed to petition the pope for certain “concessions”. Answering their supplications the pope “conceded” with apostolic authority what had been requested of him. The Bull of 1508, for example, did not “recognize” patronage as already existing by virtue of its inherency in sovereignty but it ‘conceded’ it…

…The essence of the real patronato de Indias was of course the right of presentation… Whenever a higher ecclesiastical office like an archbishopric, bishopric or canonicate was to be filled, the candidate had to be presented by the king. The kings nominations for archbishops and bishops were presented to the Holy Father for canonical installation; the candidates for the lesser benefices were presented to the archbishop or bishop of the particular diocese.
…The presentation having been made in due form, the canonical institution followed. ”
–from Mecham “Church and State in Latin America”, p. 19, 26, 28

Before the Revolution in the early 19th Century, Ecuador was part of The viceroyalty of New Granada

“Due to the distance between Spain and America, it was impossible for the king to exercise patronal rights personally. Therefore he entrusted his rights to his viceroys, audencias3, and governors. This delegation of powers was approved by the papacy, for Boniface III said that one could not expect the impossible. The law of the Indies bestowed complete power on the viceroys… in America to discharge the rights and preeminences of the royal patronage and to oblige all ecclesiastical authorities to conform to their orders with respect to it. 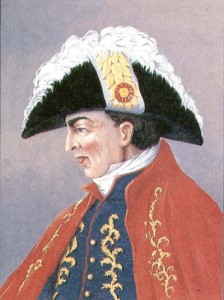 Juan Sámano, last Viceroy of Nueva Granada fled Bogota after the victory of Simon Bolivar in 1819

By virtue of his position as vice-patron, the viceroy had manifold duties arising from his relations with the ecclesiastical organizations. It was generally through his intermediation, or independent action that the right of presentation was exercised, that the clergy, secular and regular, were controlled, churches established, councils held, and education, hospitals and institutions of charity were administered. …When the presidents and audencias exercised the privileges of the royal patronage it was always understood that they were subordinate to the viceroy. ”
–from Mecham “Church and State in Latin America”, p. 22-23

How all this relates to Ecuador

This practice of Patronage was still very operational in the early 19th century when Simon Bolivar led the revolt of the Colonies against Spain. Indeed the right of patronage was one of the chief pillars of control for the Spanish Monarch over the colonies of South America. And in studying the church-state conflict of 19th-century Ecuador, we must take into account the fact that all these Ecuadorian Churchmen at the highest level were ultimately royal appointees and so by definition they were generally Spanish sympathizers which in turn means that they were fundamentally opposed to the Revolution. So as Mecham explains:

“It was inevitable, since the Spanish Monarchs had emphasized for three centuries real patronato ‘as a traditional symbol, a ritualistic principle of power, incarnate in monarchy and in the historical entity of Spain’ that the revolting colonials should regard it as an inherent, secular right, inseparable from sovereignty. What was more natural than that they, as heirs to the prerogatives of the Spanish monarchy in America, should exercise national patronage over the Church? It has been suggested, and the explanation is plausible, that the new republics assumed control over the Church to curb its power and prevent as far as possible the interference of the ecclesiastics in the political affairs of the states. This policy was rendered doubly necessary since the high Church dignitaries were Spanish sympathizers who frowned on the Revolution. ”
–from Mecham “Church and State in Latin America”, p. 49-50

It is interesting to note that this subject of the Patronage remained important and controversial throughout the 19th Century in Ecuador and even when the “liberal” governments of Alfaro and Plaza took over there was an initial effort to maintain the Patronage but as the new secular state gradually started to become a reality, the question of Patronage receded into the background. At first the “liberal” presidents themselves fought to retain the privilege and the Church fought to block them but as time went on the government simply stopped pressing the issue.

However in Alfaro’s first term the clergy was so opposed to the government that they promoted armed rebellions in the form of a “Catholic Restoration” with the assistance of Columbia from the North. As we study the events of this armed rebellion we can easily see why the kings of Europe fought so hard to gain and keep this right of Patronage. It gave them a means of controlling a contumacious clergy whose power was potentially so strong as to be able to overthrow the government. This was a weapon that Alfaro didn’t have, and his lack of this weapon became his Achilles heel. It dogged him in his first term, returned to haunt him in his second term and undoubtedly played an important role in the tragic and shameful events of January 28, 1912.

This entry was posted in Church and State, Historical Survey. Bookmark the permalink.